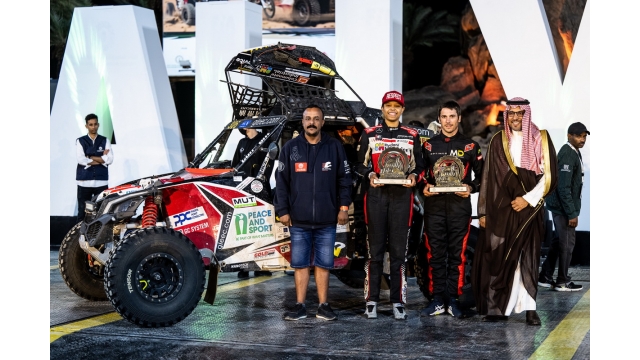 Aliyyah finished as the top Middle East car at the finish in Hail to consolidate her championship lead. She also came second in the T3 category when she beat most of the participants of of the FIA World Cross Country Bajas championship.

The Saudi Baja Hail took place over four days, with Aliyyah making her first cross country rallying start since February when she contested the Jordan Rally for the Buggyra ZM Racing team alongside navigator Sebastien Delauney.

Aliyyah teamed up with a new navigator for Hail, joining forces with another Frenchman, the experienced Stephane Duple at the wheel of the Buggyra ZM Racing Can-Am DV21 in the T3 Lightweight Prototype category for the first time.

“The goal here was to get as much experience as possible in preparation for the Dakar next year and to maintain the lead in the FIA Middle East Cup for Cross Country Bajas,” said Aliyyah. “It was my first event with Stephane also, he’s a really nice guy, and a really good mechanic and navigator, so it will be a really good experience for me.”

Following the administrative checks on Wednesday, Aliyyah and Stephane completed the qualifying stage, which set the running order for the first stage, seventh overall and quickest of the T3 Middle East crews.

The first real test of the rally came on Friday morning, with the 101km stage around Jubbah, north of the rally base in Hail. A slightly longer second stage – at 127km – took the crews back towards Hail as the first leg came to an end. Aliyyah and Stephane were classified eighth overall and second in the T3 Middle East category, just 1m46s behind the leading class time.

“It was a good day, with no problems,” reflected Aliyyah. “A really fast 230km stage more or less and it was really fast the whole way through on the sand, which was really fun as I like these kinds of surfaces. I felt good with how it went today.”

Duple added: “The first stage was a long stage, at nearly 240km. The landscape was also quite incredible, and Aliyyah drove very, very fast, always flat-out. I’m very impressed with her because, at 18-years-old, and with only five races under her belt, to drive like she did was really impressive.

“We finished eighth overall and second in the T3 category, so we were quite happy with the performance. The navigation was quite easy, as we caught our waypoints well too, so no problems.”

Two more stages followed on Saturday, with the action focused around Farhaniyah to the west of Hail. Aliyyah made the most of the morning rain and compact sand in the stages to make some more ground, eventually finishing fourth in the stage.

This allowed Aliyyah to record a superb fifth overall in the final results, second in the T3 category and top among the Middle East Cup runners at the finish.

Aliyyah said: “It was raining in the morning, so the sand in the stages was quite wet, but it was fast like yesterday. There were more rocks and very nice scenery and I’m really happy with how we did today, and we worked on the car because it didn’t feel so good yesterday. We finished with a really good result, fourth overall and first in Middle East and the second T3 overall, so it was a really good day.

“We had a few fights on the road today, we managed to catch and pass the car in front and then I passed another car. Then we got passed by a buddy of ours and we passed them back, so it was a really fun on-road fight.”

The final event in Aliyyah’s build-up towards the Dakar Rally comes on the opening weekend of December with the Dubai International Baja, which takes place on 1-3 December.

The top five result and ME Cup victory means that Aliyyah has increased her points lead in the Middle East Cup heading into the final round of the year in Dubai with a seven-point margin over her nearest rival.

Created for stressed-out individuals who feel stuck and need a change, the newly expanded 30 Days To A Happier Life…

With the recent update, the practice offers medical-grade titanium implants combined with porcelain or zirconium prosthetic teeth. The procedure is…

Purchasing a home is a significant investment. However, even before you start looking for a home, prospective home buyers need…

Dr. Brian Epp has today been recognized for being in the chiropractic industry for 24 years. This recognition is, in…

Charlotte, NC – Victims think about their medical expenses, property damage costs, time off work, or the long-term effects when…

There are a number of talks on True Digital Ownership with DeFi & NFTs, Tokenomics, and Insurance in the Crypto…

The Explainer Video Company is excited to announce their new animated explainer video services for small to medium size business.…